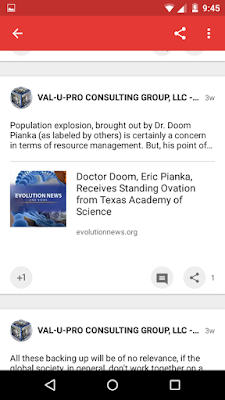 Population explosion, brought out by Dr. Doom Pianka (as labeled by others) is certainly a concern in terms of resource management. But, his point of view in terms of approach is from one perspective, and his direction of solution seems to be limited in approach. Moreover, the way it was originally presented could have been done in a different manner for a person of his stature.

For someone who have had dealt with systems thinking, and reasonably excel in design thinking, we need to look at the problem as a whole, as Steve Jobs used to say, rather than sum of the parts, and population happens to be one of the parts. We are also undermining nature, and humans' ability and creativity.

By the way, even if we were to hypothesize for this approach, we need to understand that the top 5% consume the most on a per capita basis, and we will get more bang for the buck focusing on this section of the population. But, if we were to go that route, going by human behavior, the next 5% that would become the new top 5% would most probably do the same. It is part of natural, darwinist animal behavior.

The best solution would be to identify right individuals to lead while bringing some sense to those that are already at the helm by various ways. We certainly need to continuously improve the whole system from various fronts.