Why is the gini index so high in many parts of the world in placeswhere the internet penetration is at the highest? 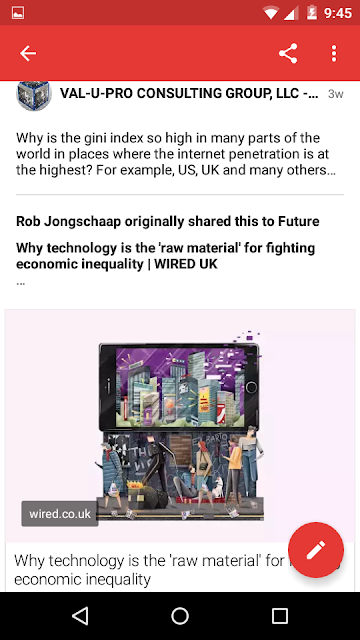 Why is the gini index so high in many parts of the world in places where the internet penetration is at the highest? For example, US, UK and many others have gini indices at the highest level in a while. While accessibility to technology is important, factors such as rule of law, corruption, power dispersion, relevant education and policies, job creation should be considered. Moreover, as shared earlier, productivity increase is causing a mismatch between rate of increase in population and labor force versus rate of increase in job growth. Further, ability to access labor force any where in the globe further complicates the situation. This is even further complicated by short-term compensation structure. It is the reason for recommending subsidies or basic income, which appears to be being tested out in some countries in Europe and Africa in the recent times. Even that would not be a complete solution for a sustainable resource management.

Please also check out the articles in the world of connections section in my media site, SrikanthKidambi.com.﻿

'... Technology is the raw material for fighting economic inequality: most economists agree that differences in technology adoption across countries account for a significant portion of differences in per-capita GDP, and the same concept can be applied to individuals.

Importantly, those with resources not only have better access to new technologies but also extract more value from them. As MIT professor Erik Brynjolfsson has noted, "the technology-driven economy greatly favours a small group of successful individuals by amplifying their talent and luck, and dramatically increasing their reward." If the top one per cent continue to swallow up the world's economic gains, entrepreneurs will be inclined to launch businesses that neglect the poor, perpetuating inequality. Declaring victory early is dangerous: when we say a product is ubiquitous before it is, entrepreneurs move on to the next invention for the upper and middle class while the have-nots fall behind.
...'