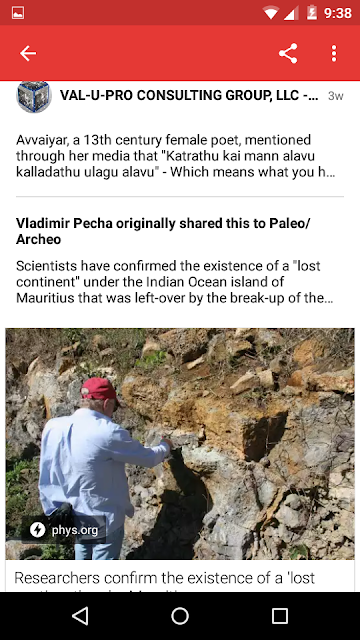 Avvaiyar, a 13th century female poet, mentioned through her media that "Katrathu kai mann alavu kalladathu ulagu alavu" - Which means what you have learned is miniscule/handful compared to what is out there, the entire world. Here is one example - We are still learning.﻿

Scientists have confirmed the existence of a "lost continent" under the Indian Ocean island of Mauritius that was left-over by the break-up of the supercontinent, Gondwana, which started about 200 million years ago.The piece of crust, which was subsequently covered by young lava during volcanic eruptions on the island, seems to be a tiny piece of ancient continent, which broke off from the island of Madagascar, when Africa, India, Australia and Antarctica split up and formed the Indian Ocean."We are studying the break-up process of the continents, in order to understand the geological history of the planet," says Wits geologist, Professor Lewis Ashwal, lead author on the paper "Archaean zircons in Miocene oceanic hotspot rocks establish ancient continental crust beneath Mauritius", published in the prestigious journal Nature Communications.