Interesting and highly relevant article for the current times. 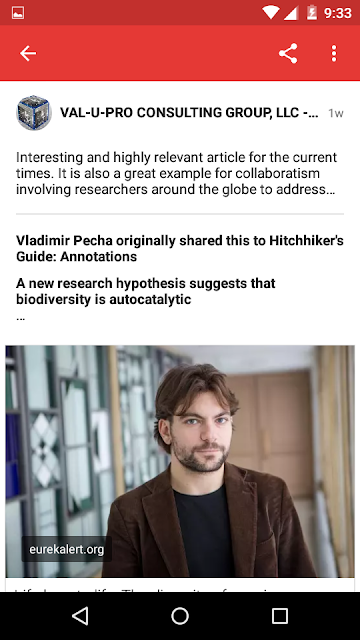 Interesting and highly relevant article for the current times. It is also a great example for collaboratism involving researchers around the globe to address one of the fundamental questions revolving around ecological sustainability. There are three immediate questions that came to my mind after reading this article:

1. "However, Dr. Cazzolla Gatti and colleagues showed that, besides his wonders, Darwin was wrong about the causes of this great biological diversity. Biodiversity - declared Dr. Cazzolla Gatti - is not originated "from the war of nature, from famine and death" as Darwint thought, but from the power of life to enable other life; not from war, but from the searching for peace; not from competition but from the avoidance of it, e.g. from cooperation and facilitation (i.e. by autocatalysis)."

2. The entire concept of (catalytic) ecosynergism - Does n't it form the basis for ecological dynamism and food web/chain/cycle?

3. Is it completely autocatalytic? If it were to be the case, are we supposed to see animals that have existed for a long time having gone extinct or in the process of going extinct? How about environment (naturally or through external forces) playing a role in this equation?﻿

A new research hypothesis suggests that biodiversity is autocatalytic

If competition is the main evolutionary driver, why can so many species coexist within the same ecosystem instead to have a few that dominate? This a long and central question in ecology. Many ideas have been suggested in an attempt to explain this evolutionary paradox. Most of them are based on the importance of ecological niches for the maintenance of differentiated against dominated environments.

In 2011, Dr. Roberto Cazzolla Gatti, associate professor in Ecology and Biodiversity at the Tomsk State University (Russia) proposed the "Biodiversity-related Niches Differentiation Theory" (BNDT), arguing that species themselves are the architects of biodiversity, by proportionally increasing the number of potentially available niches in a given ecosystem. Along similar lines, but independently, the idea of viewing economics, biology and ecology as emergent autocatalytic sets (self-sustaining network of mutually "catalytic" entities) was suggested by Dr. Wim Hordjik, researcher at the Konrad Lorenz Institute for Evolution and Cognition Research, Klosterneuburg (Austria) and the famous McArthur Fellowship winner, Prof. Stuart Kauffman from the Institute for Systems Biology, Seattle (USA).

Now, in a paper published in Ecological Modelling (Volume 346, 24 February 2017, Pages 70-76) with the title "Biodiversity is autocatalytic" the three scientist merged their ideas in a new hypothesis to explain why and how a so great amount of species could live together in the same environment. The research paper suggests that one group of species enables the existence of (i.e., creates niches for) other species. This means -- the authors say -- that "biodiversity can indeed be considered a system of autocatalytic sets, and that this view offers a possible answer to the fundamental question of why so many species can coexist in the same ecosystem".
https://www.eurekalert.org/pub_releases/2017-02/nrts-lbl020917.php
iPerspective / Perspective.ly