There is something logically missing here.

There is something logically missing here. If Russia played a role in Mr. Trump's winning, and there was a case of collusion, why should Trump be afraid now? How is it different now? For a country as big and powerful as US, even the statement that another country tampered with elections at the presidency level calls for many questions to be answered in terms of quality of people hired, talent pool at different levels, educational system that trains these people, hiring process in place and more.

Secondly, the argument of Mr. Trump being a conman or not a right candidate for presidency has been in certain sections of the media even before he got elected. Why is it going to be any different now?

Trump knows that he's an ignorant conman... and he's afraid of being exposed. That's the REAL reason behind his war on the press. 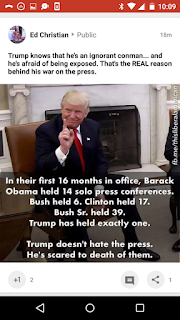