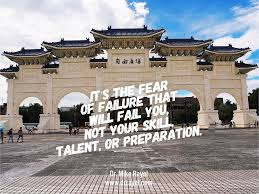 But, when we have those three (skill, talent, preparation) combined with self-confidence, usually the fear of failure would be to a lesser extent compared to without those three.

There is a saying in Tamil, "Ilam Kandru Bayam Ariyadhu", which means "A young calf have no fear". Sometimes, this could work in a person's favor as was the case in the story, David vs. Goliath with David winning over Goliath. But, even there, David would not have won, if not for his skill, ability to throw stones accurately, and playing to his strength.

There is an interesting perspective presented by Malcolm Gladwell to this story. Though I liked his version, the one aspect where I beg to differ is that David, as presented in the story, was a young kid with not much exposure or experience. Expecting David to plan well ahead on the art of battle against Goliath appears a bit questionable. Moreover, as presented in the fight scene in the movie, David offered to fight right before the battle, which would not have given him sufficient time to plan for the battle.

For that reason, I believe that David was more of a young calf without fear, who fortunately happened to excel in what he did that worked to his favor in the battlefield.

This topic on correcting grammar, and being a grammar police is slightly more than whether a person is getting paid...

This topic on correcting grammar, and being a grammar police is slightly more than whether a person is getting paid or not for language services. First of, nowadays with social media becoming another main forum where original ideas are being shared, we can't discard the writings for not being grammatically right, and for not being the traditional form of publication. Secondly, ideas, views and other discussions, as long as it conveys the point, should not be discarded for lack of grammar perfection. Does it mean that grammar is irrelevant? No. Certainly, well structured writings would draw more attention than poorly written ones, at least until the author/writer/speaker has built a follower space for himself/herself. Further expanding on the topic of languages, here is my take on languages, and what we could expect in the future. An important aspect to any language is that every language has gone through evolution with time, and with the spread of language. This evolution is also

Image by Alexas_Fotos from Pixabay   As mentioned prior to the last elections, when there are career politicians with majority of them being millionaires from just being a lifelong politician, there will be a disconnect between those in power and the real world, real economy and the real issues to be addressed. Moreover, when the world is run by false and fake news, then there are more chances for cronyism and nepotism. Considering that a politician holding even the lowest of ranks tend to make two or three times the salary compared to the median income for a particular country, a politician just by holding the office is becoming 2 or 3 times more financially equipped during those 4 or 5 year term. This fact implies that their income stream just from official means, along with perks should make them financially equipped for almost a decade or so. Think about career politicians, who have been there for 30-40 years and how powerful they could become just from holding t