Image by Alexas_Fotos from Pixabay
As mentioned prior to the last elections, when there are career politicians with majority of them being millionaires from just being a lifelong politician, there will be a disconnect between those in power and the real world, real economy and the real issues to be addressed. Moreover, when the world is run by false and fake news, then there are more chances for cronyism and nepotism. Considering that a politician holding even the lowest of ranks tend to make two or three times the salary compared to the median income for a particular country, a politician just by holding the office is becoming 2 or 3 times more financially equipped during those 4 or 5 year term. This fact implies that their income stream just from official means, along with perks should make them financially equipped for almost a decade or so. Think about career politicians, who have been there for 30-40 years and how powerful they could become just from holding those offices.
Here is a simple data showing the net worth of congressmen before and after the 2008 crisis. For that matter, there were reports that most of the politicians in the congress were least impacted by the 2008 crisis, when most of the world's net worth was crashing. 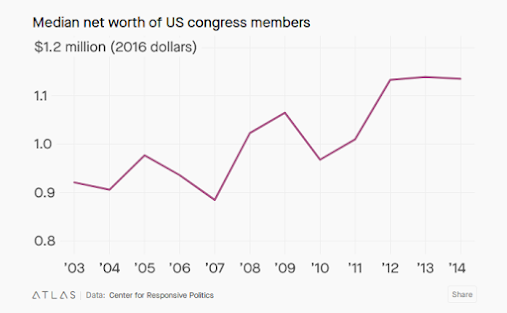 https://qz.com/1190595/the-typical-us-congress-member-is-12-times-richer-than-the-typical-american-household/
For that reason, after thinking over, it makes even more sense for any politician, especially those at the highest level not to be there for more than one term. Prior to this article, right during last elections, we had a survey about term limits, where we considered two terms for politicians. However, after thinking over and seeing what has happened around the globe over the last four years, even one term for a leader, especially at the highest level, appears to be sufficient to mess up the lives of many. For example, a President holding an office for 4 years is playing on the lives of the citizens of that country for around 5-6% of their lifespan, if we consider the average life expectancy of the world to be 70 years.
For that reason, it is time for people to consider bringing a change where no politician and famous celebrities who become politicians (especially at the highest level) would be in power for more than one term. In this way, even person who would hold a office should have another career path for them to financially equip themselves for their lifespan. This kind of change would also make these politicians realize that there will be life after being a politician, which can impact them as well..
By the way, as long as politics as it is now remains that way, it provides various avenues through official and unofficial means to become rich. By limiting the term to one term, it would give an avenue for more people to become richer.
My 2 tulips thought ....